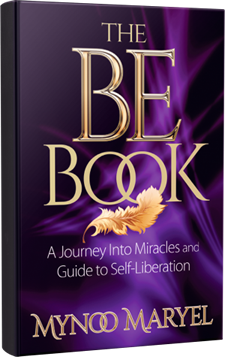 A Journey Into Miracles and Self-Liberation

The BE Book is an autobiographical journey. Told through the real life incidents that shaped and directed Mynoo Maryel’s life, it’s an enchanting tale of reinvention and transformation from the busyness of DOING to the effectiveness and the clarity of BEING.

The BE Book is an autobiographical journey. Told through the real life incidents that shaped and directed Mynoo Maryel’s life, it’s an enchanting tale of reinvention and transformation from the busyness of DOING to the effectiveness and the clarity of BEING.

Mynoo’s story takes us from her childhood as a rebellious girl in India, to her life as a driven, corporate executive in London, and onward to Bali before her emergence and enlightenment in California. It was there that she was connected to her own mastery and to Masters from this plane and beyond.

The BE Book invites readers to open up, to examine and apply the practical tools and insights that Mynoo shares and that can transform their own life experiences. It takes readers on their own journey into miracles, allowing them to feel the liberation of living in the BE state.

This book is aimed at people in transition, particularly those who are at a pivotal moment in their life when they must make a choice. One end of that pivot is a choice fueled by fear and on the other end is a choice empowered by love. This book supports the reader in making a clear choice empowered by love. Mynoo’s soul’s mission is to expect and accept miracles and have them become the norm. In everything she now engages with, she chooses pathways to miracles. By adopting the BE and letting go of the busyness of DOing, she has experienced the liberation possible through miracles. She is enthusiastic to share this with readers around the world, so that they can have this experience for themselves. At its core, this book is about reclaiming the power of your presence through choice. If you’ve gotten to a place where you know what you have is not all that you want and maybe you don’t even know what you want anymore, this book is for you. ‘I used to hear people in spiritual circles say, “Just let go.” And I would ask myself: “But how do I let go? How do I stop stressing?” The moment I chose to give up control, especially that tight control over whoever I thought I was, I reclaimed the power of my own presence. It happened through choice.

As Founders of a global movement to accelerate positive change and greater well-being, worldwide, we are delighted to have read Mynoo Maryel’s, “The BE Book,” as it underlies the core principles of our movement. Mynoo has captured the very essence of life’s true purpose and meaning. Thank you for sharing your journey and baring your soul. Thank you for your magnificent quotes and insights. It will be our pleasure to share this artistic treasure with followers of our movement. – David Giller and Helene Abrams, Founders of Think Positive World

I haven’t finished reading this but I am compelled to encourage people to read this. It expands my knowledge of my BEingng.

Thank you Mynoo for sharing your wisdom, insight and BEINGNESS!

A very wise, autistic young man, shared an astute observation with me. He said, “The difference between us (those on the autism spectrum) and you guys (those not on the autism spectrum) is that we are human BEINGS and you are human DOINGS!” Having an autistic son, his statement struck me as profoundly true and has made me more and more conscious of living and BEING in the present.

“The BE Book: A Journey Into Miracles and Self Liberation,” is an engaging journey into living in the here and now. Thank you Mynoo for sharing your wisdom, insight and BEINGNESS!

I highly recommend getting your copy of The BE Book and sharing it with your family and friends!

Mynoo’s spectacular book is the best “date with yourself” I could recommend. It’s time for all of us to enjoy our expanded, celebrated, empowered self… our juicy miracles are our path through life! Enjoy, enjoy, enjoy….

As someone who actually met the author years ago (we were introduced by a mutual friend at a business breakfast), I can bear real-world witness to the extraordinary transformation she has undergone, and chronicles so delightfully here in The BE Book.

The woman I encountered was indeed the classic Type A executive and entrepreneur, a near-perfect “success” story, almost ruthlessly focused on getting jobs done and winning at all costs — and likely missing, at least from my perspective, that she might be sacrificing her own heart in the process.

When I inquired (gently) into that, she paused. She spoke of feeling that she’d checked off all of life’s boxes, basically had it all wired, and yet — and it was a pretty big “yet” — there was still something vague and unfulfilled inside. She just couldn’t put her finger on it.

During our chat she shared that it felt like she was desperate for something, even grasping for it, but had no idea what it actually was, or where it might be. Since she’d been so successful by all the external markers, and had mastered pretty much any game she’d ever been interested in enough to attempt, she was baffled. But no matter, she wasn’t going to let it break her stride. By no means. So she shrugged it off and carried on.

I won’t spoil the stories of her breakthroughs, which are told so charmingly and engagingly here. What I will say is that through them, she discovers how to shift herself out of doing mode into being mode, and in the process finds her true (and truly wonderful!) self back.

And that’s when the magic starts breaking out, absolutely everywhere in her life.

It’s been profoundly uplifting for me to read how that powerhouse of a businesswoman I met has now blossomed into her spiritual gifts, which are powerful in another way entirely. As we follow her on her adventures, she becomes a living invitation to the miracles of which she speaks. And at the same time, since she’s so approachable, so human, we can easily see ourselves in her reflection. For me, that is the real gift in this book.

It’s also a great primer, full of useful tools and what she calls BE practices. (While these might seem like 101, they’re really not… especially when I actually do them!) I thoroughly enjoyed The BE Book and look forward to what’s to come from Mynoo Maryel, as her inspired and inspiring journey continues to unfold.

The Magic and Miracles of BEing

This is a beautiful manual for Being. A book for everyone in the midst of change and transformation. An enchanting magical journey where Miracles become the norm. Mynoo offers from her vast experience, clear practices to incorporate into our daily lives.
If not now when? Is it time to allow life to live you in that sweet ease? I say Yes. The BE words are wonderful. Dreams come true. I am honored to know Mynoo. Mynoo is a living dynamic miracle, practicing all she offers. I keep this book by my bedside, its healing balm a gift that soothes me to sleep, that renews me upon awakening. The BE Book is an adventure, offering new and deepening insights each time I open it.

BE Love! Be Joy! Be Alive! Be a living Miracle!

I really enjoyed the fast pace of the book, the ease and grace with which Mynoo conveyed complex spiritual and metaphysical concepts through the telling of her own rather colourful life story and the detailed, practical exercises she suggests. The book will be useful for anyone looking for answers to life’s sometimes challenging lessons: just BE (and the book explains how and why). Highly recommended (and I don’t do so often).

BE whatever you want to BE

I met Mynoo in London, she struck me as an amazing lady who knew there was more to life than the grind of commercial activity.
I stayed up last night to read the book
The transition Mynoo has made is amazing, I am just sorry I could not make it to reconnect in person a few weeks ago.

Now, let me tell you one thing about me that is 100% certain. I am a massive sceptic. Getting me to commit to anything or believe in anything that isn’t an absolute fact is close to impossible. The first few chapters of the book were exciting. A simple read about a girl in India – someone I started to relate to. As the book progresses, you start to get more and more involved in her story. I’ve had many people tell me what to do and what not to do. This is the first book that tells me How To Be, and then it tells me how to implement the BE concept. I thoroughly enjoyed it and can read it over and over again. I strongly recommend this to everyone!

Insightful, incredible, inspiring! Some books transform your life, make you believe in yourself… I am so glad I took this BE journey with Mynoo Maryel!

Live a life full of miracles!